In May 2018, history was made in Banjul. For the first time a woman was elected Mayor amid stiff competition from both fellow female and male candidates. The election came on the heels of a landmark presidential election that resulted in the change of government ushering in the third republic and a flurry of political activities and political players.
Little known but well-travelled and much exposed Rohey Malick Lowe, a business woman and daughter of a former mayor was declared mayor and straight away tasked herself with the job of achieving a cutting-age transformation of the city she was born and bred. On assuming office on 12th May 2018, Mayor Lowe proved she was both tenacious and very strong willed. She combined political shrewdness and combative approach to initiate, drive and roll out ideas for which she mobilized human and material resources to achieve. One of these is the complete overhauling of the Council’s manpower, carried out in the form of a staff audit. That exercise heralded a new era at the council injecting a new sense of purpose and responsibility, creating an avenue to harness the full potential of the retained staff. The result was instant and monumental. Revenue, the nerve center of all operations was improved with zero leakages amid a rigorous and transparent control of council’s income. So, after putting its act together, so to speak, the council set to roll out several ambitious projects all designed to bring change to Banjul, its environment, inhabitants and even visitors. These achievements include:

Education
The Banjul City Council initiated a robust education programme which provided 200 scholarships to Banjulians attending schools from university level down to other secondary and tertiary schools. This project is part of an education policy focusing on enhancing quality education system for the students in a healthy environment, providing incentives for teachers and localizing the 2030 SDGs agenda. The Mayor’s office in partnership with Oostende City in Norway secured a whopping 3.1 Million Euros from the European Union to inject into this and other projects. The BCC also secured bilateral training courses for 36 people (including Councilors, staff and residents of Banjul from The Government of the People’s Republic China on human recourses development, education policy, medical care, information technology and public diplomacy respectively.

· Health
The BCC has always been involved in the operations of the largest hospital in the country, the Edward Francis Teaching Hospital and the welfare of its patients. Mayor Lowe is a board member and therefore very much privileged to be on top of issues related to the many challenges faced by the institution. Since taking office, the Mayor and her team made several interventions in the hospital after integrating it into its health policy under the EU funded project. Another component to health project is waste management which the council tackled with practical steps starting with the provision of some 3000 (Three Thousand) dustbins to each and every household in Banjul under the Urban Waste Management Initiative the Mayor initiated for Banjul. Under this Initiative the BCC secured a compactor for the waste collection and a sewage vehicle from Nanning City – China, a twin-link partner to Banjul City Council).

The BCC also donated a fully equipped and first community ambulance to the Banjul Red Cross Society through a support from Banjul-Oostende City Link.
In early 2020, the world experienced a major health crisis with the Covid-19 pandemic taking a major toll on lives and straining health care systems around the globe. In The Gambia, the Banjul City Council led the way in mitigating its effects by committing resources, time and energy to building national consciousness about the virus through massive awareness campaigns and preventive programmes. Apart from a well established functional Covid-19 prevention programme, which among other things distributedhandwash materials to all the strategic locations in Banjul and institutions, the BCC also pioneered the launch of a Food Bank, which targeted the vulnerable residents of the city with food aid to ease their stay-home-and-safe campaign under the emergency regulations.

INFRASTRUCTURE:
The Banjul City Council projects that the City’s population will grow by multiple boundsin the coming years. The century old Albert Market remains the most sought-after place on feast days when thousands would flood there to shop for their families. The market’s infrastructure urgently needed attention more than ever before and naturally, the BCC directed funds to upgrade the market’s facilities to make life easy and comfortable for both traders and visitors. The Council embarked on a massive upgrading of facilities in the market through the construction of an abattoir andmodern toilets as well as stores and vending slabs for the women.

The BCC also prides itself in not only building a modern facility for its head quarters but also the construction of the multi-purpose excellence Centre for the youths of Banjul. The council also influenced the implementation of the Banjul Rehabilitation Project, which will address 37km of roads, drainages and sewage systems of Banjul and construction of concrete and interlock block roads at Peel Street, Spalding Street, Spalding Curve, Primet Street, Tally Dawda (Tobacco Road) and Haddington Street. Through these projects the large, low-density suburban neighborhoods of decades ago have changed significantly.

EMPOWERMENT:
Being a woman privileged to attain empowerment processes in her upbringing and professional life, Mayor Lowe vowed to break the cultural barriers and low esteemed concept among young Gambian women through an empowerment programme she called Rohey Malick Lowe Women and Girls Empowerment Initiative.
This initiative, through her personal support was able to give D10, 000,000.00 (Ten Million Dalasis), to support the women of Banjul to start-up businesses or expand existing ones.
So far, the initiative has already disbursed the funds to 45 women groups and 30 individual women in business. The initiative also donated construction materials to Banjul City Council worth D150, 000.00 (One Hundred and Fifty Thousand Dalasis) for the construction of the abattoir in the Albert Market.

Refela was created in March 2011 in Tangier, under the auspices of women Mayors and locally elected representatives with the support of the Pan-African Organization. This initiative is for women emancipation and gender quality to meet the SDGs and African vision on human right and zero tolerance of children on the streets.

Sports
There is a growing worldwide interest in understanding optimal and healthy pathways for talent development in sport. The Banjul City Council, BCC, recognises the importance of sports and is committed to giving it top priority as part of its general youth empowerment programme. 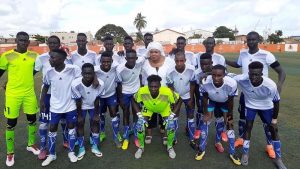 The city of Banjul used to be home of all Gambian sports, players and administrators. Sports was a big point of convergence in Banjul with most if not all of The Gambia’s legends in all disciplines either Banjulians or were resident there. The culture and tradition of sports need to be revisited and revamped with injection of resources to upgrade facilities and incentivize players and teams to improve participation and boost morale.
The Mayor’ trophy, which is dedicated to the Mayor of Banjul, is a major launch pad for the rejuvenation of the Council’s participation and involvement in sports.
As part of this progamme recently, the Mayor made a personal contribution of some D80,000 to meet the registration fees for all teams competing in the championship
The BCC projects that in the coming years, other disciplines like basketball, volleyball and athletics will receive greater attention in the drive to get Banjul sports in general back in full swing

Good Governance
The story of the first two years of the tenure of Mayor Lowe cannot be told in full without a chapter on the progress made in transforming the very institution of the BCC itself, all pegged on good governance. The process started with the restructuring of the Council by establishing the Office of the Deputy Chief Executive Officer, records office for proper filing system of the institution to ensure an efficient and functioning council, attending to the needs of the people of Banjul at all times. Having doubled its revenue, the council moved from insolvency by settling all its bank debts, restoring of electricity and water supply from NAWEC, increasing the salary of its staff by 50%, and providing risk allowances to all revenue collectors to avoid fraud or leakages. Recruited 45 youths, trained them professionally and employed them as securities.

The BCC also opened itself to public scrutiny by introducing a suggestion box for the general public to send in their contributions about what they think of the work of the council. To sum up it up, the BCC sets itself the task of serving its people through the unbending virtues of its head and mayor Rohey Lowe which include an all-inclusive approach for the effective running of the Banjul City Council.