The old adage states that business environment reform not only promotes the development of markets that encourage competition but enhances effectiveness and capability of all businesses. However, this has not always been the case. In a poor country in transition country, like The Gambia, the business environment is often said to be hostile to marketled growth, regulatory barriers and other underpinning issues.

In a bid to defenestrate these bottlenecks and supplant it with a more result-oriented approach to place the country’s business environment on a strong footing, the Gambia Chamber of Commerce and Industry – a non-profit membership organization responsible for facilitating of business development and trade promotion –created the National Business Council (NBC) of The Gambia.
Established some three years ago, the Councilis the highest platform for public private dialogue in The Gambia. It has already met at least five times over the past two years.

NBC and reforms
The main agenda of the NBC over the past two years has been centered on Business Environment Reform (BER).
This is due to the continuous plummet of The Gambia’s ease of doing business ranking captured in the World Bank ‘Ease of Doing Business’ report in the past decade.
In 2019, the country ranked 155 out of 197 countries. On average, The Gambia plummets by a rank every year for over a decade.

To mitigate this decline and other impediments, there existsa NBC technical committee responsible for ground work and technical analysis and follow-ups to ensure smooth implementation of the BER agenda.

Partnering with the GCCI in constituting, researching, and forwarding the BER are the Office of the President, Office of the Vice President, and the Ministry of Trade.
It is important to note that successive vice presidents have been very supportive to the NBC, with the current VP, Dr Isatou Touray, as the political champion to secure the needed political will.
The Council consists of five cabinet ministers and eight members of the private sector identified by the GCCI (the secretariat of the NBC)

Programs, Activities and highlights
Since its inception in 2017, the NBC met on numerous occasions most recently last week at the GCCI headquarters in Bijilo.

Chaired by the VP Dr Isatou Touray, the meeting followed up on engagements with institutions that met with the NBCs technical committee in pursuit of these reforms in Taxation, Land Administration, Access to Finance, Access to electricity, and Trading across borders. These are the areas the NBC is working on to enhance the competitiveness of businesses in The Gambia. 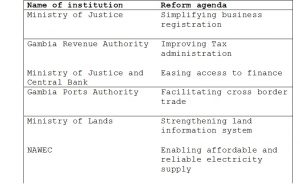 According to the GCCI, an enhanced business environment will also add to the country brand of the country.
The Chamber reports increased responsiveness from the political leadership, however, it calls for greater efforts for government departments and agencies to effectively respond to the reform process.
The NBC technical committee is made up of staff from Ministries of Trade and Finance, GCCI, GRA, and GIEPA to the various government agencies namely:

The above are the key areas targeted to improve the Ease of Doing Business in The Gambia, enhance the business environment and make The Gambia a preferred destination for investment.
The NBC has now established the gaps in the processes in these institutions that hinder their ability to deliver service.
These have also been assessed, budgeted and funds raised in some instances to effect specific reforms.

The GRA has already commenced to enhance the existing GAMTAXNET to improve efficient service delivery in the immediate and medium term.
The revenue collecting body will also, by next year, introduce the I-TAX – an internet-based electronic tax filing system – to incorporate all the other relevant functions of tax administration. This is expected to sharply reduce time and cost for both GRA and tax payers.

Kudos and pledges
GGCI President Edi Mass Jobe declared the convergence over and thanked demonstrated effort of government in engaging the private sector. “Every idea shared, and every opportunity seized by you helped us achieve the heights,” he later remarked.
The VP, in turn, also reiterated government’s commitment to prioritising Business Environment Reform and to work hand-in-glove with the GCCI.