What Is Inclusive Growth And Which Strategies, Policies And Programmes Can Best Promote It? Part 3 – Gambia Radio Stations

What exactly is inclusive and equitable growth and what does it imply?
As we have noted above, the past six years have witnessed a heightened attention in major international conferences and policy discussions to inclusive and equitable growth, especially in African countries. All of this was underpinned by publication of several high-powered books and academic and operational research articles on the issue. Prominent among them are the books by the Nobel Prize winning Economist, Prof Joseph Stiglitz (“The Great Divide: Unequal Societies and What We Can Do About Them”, Norton, 2014), by the French Economist Thomas Picketty, who has devoted the greater portion of his brilliant academic career to studying the issues of capital and assets accumulation, income distribution and inequality (“Capital in the 21st Century”, Harvard University Press, 2014).

They were joined by various other publications by several UN agencies including the UNDESA’s flagship publication, Report on the World Social Situation entitled: “ Inequality Matters” (2014) as well as the international NGO, Oxfam’s highly publicized reports on increasing inequality in the world, that were well received at the 2016 and 2017 Davos Conferences and the World Bank. UNDP Africa also published in 2017 a comprehensive book on the subject area, entitled: “Income Inequality Trends in Sub-Saharan Africa – Divergence, Determinants and Consequences”. Its preparation and publication was coordinated by the former Chief Economist of UNDP Africa, Dr. Ayodele Odusola, and has also been extensively quoted in this paper and several other articles.

The common thread that runs through all these publications is the argument, backed by a battery of statistics, that there has been worsening inequalities within and across countries over the past three decades, which seem to have reached intolerable levels in recent years. This implies that even as countries, including those in Africa, registered higher and higher robust growth rates, more and more people were being bypassed by the benefits of such growth (See the figure below). It shows that the HDI as presented in UNDP’s Human Development Reports, which is a good indicator for multi-dimensional poverty, achieved by African countries as a whole in 2004 was slightly higher than the levels registered in 2016, even though economic growth was consistently maintained at relatively high levels during much of this period. This partly indicates that growth was not sufficiently inclusive during the period.

But what precisely does inclusive growth mean? Definitions range from highly technical to more operational explanations. Let us try to answer this by looking at definitions put out by different international development organizations in recent years, including UNDP.
OECD defines inclusive growth as “economic growth that creates opportunities for all segments of the population and distributes the dividends of increased prosperity, both in monetary and non-monetary terms, fairly across society”.

For the World Bank, “ rapid and sustained poverty reduction requires inclusive growth that allows people to contribute to, and benefit from, economic growth”.
For Wikipedia, “inclusive growth is a concept that advances equitable opportunities for economic participants during economic growth with benefits incurred by every section of society”

For UNDP (Thangavel and Paloma) “inclusive economic growth is not only about expanding national economies but also about ensuring that we reach the most vulnerable people of societies. The “equality of opportunity” and “participation in growth by all” with a special focus on the working poor and the unemployed are the very basis of inclusive growth” .

UNDP tried to go beyond the simple definition of inclusive growth to giving it an operational meaning by stating that “Growth is inclusive when it takes place in the sectors in which the poor work (e.g. small scale agriculture and SMEs sector); occurs in places where the poor live (e.g. undeveloped areas with few resources); uses the factors of production that the poor possess (e.g. unskilled labour); and reduces the prices of consumption items that the poor consume (e.g. basic foodstuffs, fuel and clothing).”

Arthapedia also tried to provide a more operational definition of inclusive growth: “Inclusive growth means economic growth that creates employment opportunities and helps in reducing poverty. It means having access to essential services in health and education by the poor. It includes providing equality of opportunity, empowering people through education and skills development.”

Finally, in addition to taking into account the above considerations, more recent definitions of inclusive growth also try to integrate the principles of environmental sustainability. This is also of high relevance to the support of the Next Generation UNDP to promotion of inclusive growth.

Thus, at the heart of strategies for promoting inclusive growth is ensuring equity in opportunities for all sections of a society to participate in wealth creation and benefiting from it, particularly the disadvantaged ones. This in turn implies focusing on key drivers of inequalities in societies, In a bid to shed light on some of the key drivers of inequality in developing countries., the above-cited UNDESA report dramatically puts it as follows: “When the world leaders adopted the Millennium Declaration in 2000, they pledged to create a more equitable world. Yet, in many countries, the ladder of opportunity has become much harder to climb…over the last few decades, the wealthiest individuals have become wealthier while the relative situation of people living in poverty has improved little.

The imperative for inclusive growth was illustrated by Terry Mckinley in the following graph, which shows that reductions in inequalities in opportunities tend to fuel poverty reducing growth and vice versa. But it also shows that inclusive growth is not automatically tantamount to poverty reducing growth or what became to be broadly termed as “pro-poor growth, which is important to policy making. 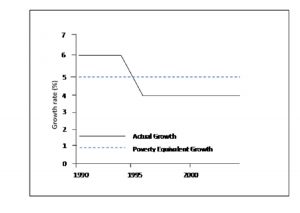 Trying to distinguish between inclusive growth and pro-poor growth may sound superfluous but this has important implications for policy making, especially in the context of SDG implementation. The premise of this thesis is that while the notion of equitable participation in the growth processes of all sections of societies is key to achieving the “leave no one behind objective”, effective pro-poor growth could be impactful on poverty and indirectly on reducing inequalities and vice versa

In Figure 3, Terry Mckinley demonstrates that pro-poor growth in itself may not reduce significantly, if at all, the disparities in wealth among the major social groups if the starting point is marked by major income gaps and notable poverty among the bottom 40%. For instance, in the table below, the share of income of the richest 10% is about 5times the share of the poorest 40 per cent. Inclusive growth could allow both groups to participate equally in the growth process, but that may not necessarily lead to reduction of inequalities and poverty reduction. 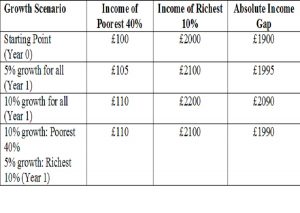 This implies that for circumstances where income inequalities are huge, poverty reducing measures have to be combined with inclusive growth policies and programmes which require growth to disproportionately benefit the poorer and disadvantaged groups.
So in line with our basic objective for drafting this paper, the Policy Unit of a typical UNDP Office aiming to support a host country promote inclusive growth and development would start by working with the National Authorities in measuring or estimating the extent of the main drivers of non-inclusive growth, key among which is inequalities. The Economic Teams should also complement this analysis with that of the incidence of poverty. This can be done within the context of SDGs acceleration plans or overall national development plans, integrating SDGs in a systematic manner. The approach to that is outlined in the next section.
Measures of Pro-Poor Growth
PR = y+g+Y-1+G1+yg To be elaborated.

Lamin M Manneh is the director of the UNDP Regional Service Centre for Africa in Addis Ababa, Ethiopia.
The views expressed in this article are not necessarily sanctioned by UNDP.